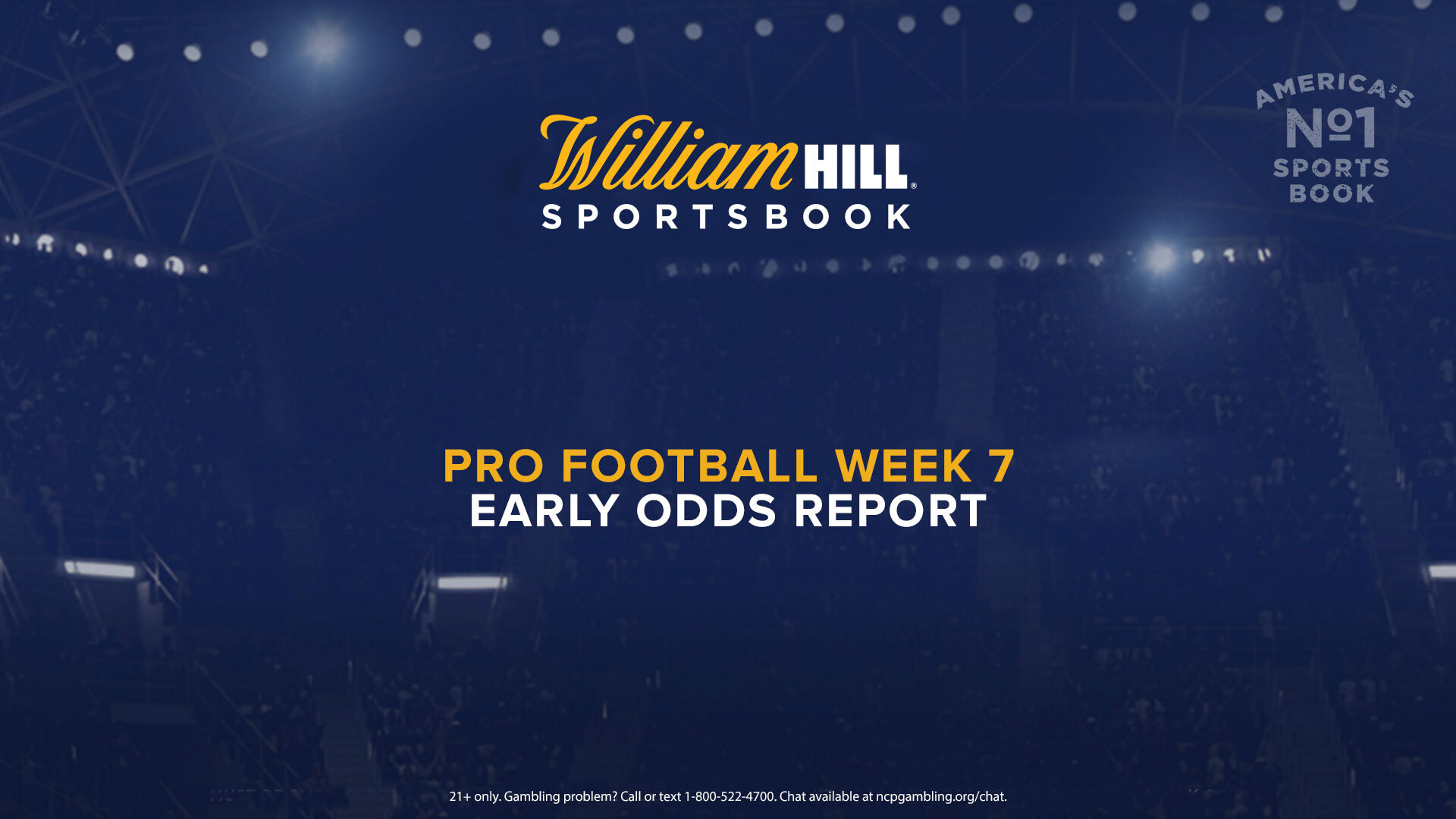 Six weeks of the NFL season are complete, as the past few days saw exciting finishes, plenty of upsets, and the Jets and Cowboys failing to cover again (both teams are 0-6 against the spread this season).

William Hill has odds up for all 14 Week 7 games, including a monster matchup between undefeated teams.

The Steelers (5-0) are 1.5-point road favorites against the Titans (5-0) on Sunday, with the total lined up at 52.5. Even though they are two of the three remaining undefeated teams left, with the Seahawks being the other, the Steelers have the fourth-lowest Super Bowl odds at 8/1 and the Titans are eighth-lowest at 14/1.

“The Steelers looked dominant against the Browns last week, and the Titans went through an absolute war and were pretty lucky to win that game against the Texans,” said Nick Bogdanovich, Director of Trading for William Hill US. “Tennessee’s drawing some early money though. I don’t think that line will ever reach 3, it’ll hang around pick or 1 I’d say. Can’t see the Titans closing as the favorite either.”

There has already been some notable spread movement after William Hill released its Week 7 odds, whether it’s shifts of multiple points, moves through key numbers or both.

There hasn’t been a bigger change than Cowboys at Washington, with Dallas going from a 3.5-point road favorite to pick’em. Two other spreads have shifted by at least two points: Giants (+6 to +4) at Eagles and Bills (-11 to -13) at Jets.

William Hill Nevada also released two new betting markets for the Jets today, including whether Gang Green will finish 0-16. “No” is the -450 favorite, while “Yes” is listed at +350. Additionally, the lookahead spread for Jets vs. Chiefs in Week 8 has opened with the Chiefs as 22-point home favorites.

“I don’t have the Jets as the worst team I’ve ever rated, there’s been some pretty bad ones,” Bogdanovich said. “But obviously they’ve got their issues, and [Joe] Flacco’s looked god awful. As long as they don’t quit, they’ll get better once [Sam] Darnold gets back in there. Their receivers aren’t too bad with Jamison Crowder and [Breshad] Perriman, and they were both out early. As long as they don’t quit, I don’t think they’ll end up as the worst squad of all time. But they’ve had a lot of bad things go against them, that’s for sure.”

Other matchups have been hovering around a field goal, with the Bengals going from +4 to +3 hosting the Browns, the Lions changing from +3 to +2.5 at the Falcons and the 49ers moving a whole point from +3.5 to +2.5 in their important affair in New England.

“The 49ers have been the toughest team to read this season just because they’ve been obliterated with injuries from Day 1,” said Bogdanovich. “Obviously they went to the Super Bowl last year, but they’re a super good team when all their parts are healthy. I guess people are thinking that the 49ers are closer to returning to normal after that win over the Rams, and it also helps that New England looked terrible against Denver. It does feel a little weird to see the Patriots favored by under a field goal at home, even if it is a different version of this team.”

The final Week 7 contest has an intriguing line as well, as the 5-1 Bears are 5.5-point road underdogs against the Rams. The Rams are coming off a 24-16 defeat to the 49ers, and all four of their wins this season have come against the NFC East.

“The Bears were pretty well bet last Sunday against Carolina,” said Bogdanovich. “I would imagine come Monday night, because it’s two good teams, it won’t be too big of a decision one way or the other. I don’t think the Bears get much respect from the bookmakers, but they certainly got it from bettors last week. We got beat up on that game.”