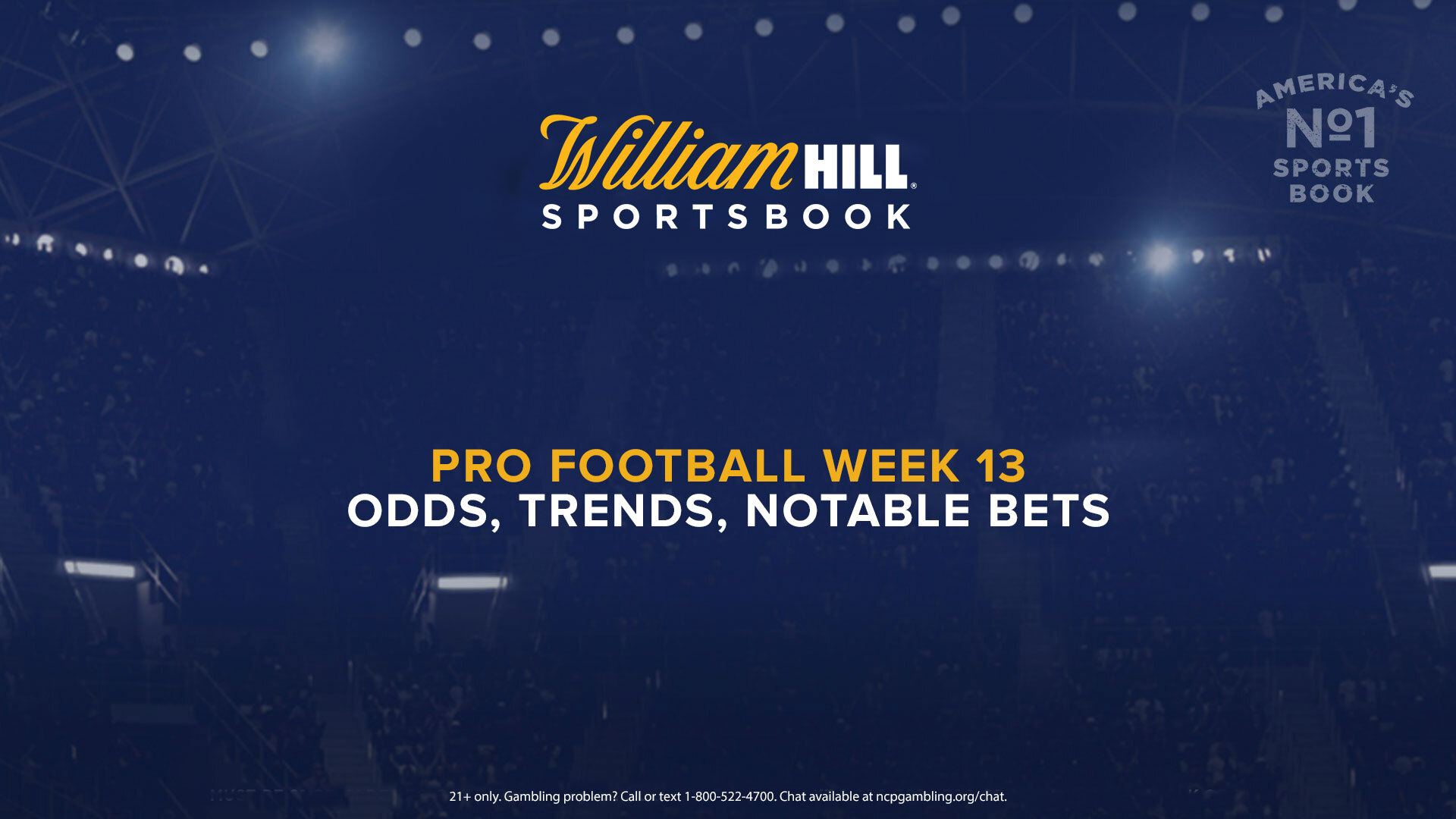 Week 13 of the NFL season features some big spreads and some betting intrigue for quite a few underdogs.

There are four games with double-digit spreads this week at William Hill, and three others that are at a touchdown or higher. Yet in two of those games, the majority of William Hill bettors are siding with the underdog in terms of total dollars wagered. In fact, of the 12 NFL Week 13 games with one team favored, the underdog is receiving the majority of the total dollars wagered in five of them.

Let’s start with the game featuring the only underdog to be receiving the majority for both the total number of tickets and total dollars wagered in Week 13. The Rams are road favorites in their NFC West clash against the Cardinals, and despite the line climbing up, the underdog is catching the attention of William Hill bettors.

“This one went from 1.5 all the way up to 3, back to 2.5 and now at 3 again,” said Nick Bogdanovich, Director of Trading for William Hill US. “This line has been a rollercoaster ride. Huge game obviously, huge playoff implications. Both teams know each other well too. We opened the Rams as a road favorite just because they’re more balanced as a team. I think Arizona’s leaking a little oil, Rams just look a little more solid.”

Washington isn’t the only sizable underdog getting the majority of the dollars, as another NFC East squad is in the same group. The Eagles are getting 8.5 points on the road against the Packers. Green Bay -8.5 ranks first among all Week 13 spread as of now with 87% of the total number of tickets, however Philadelphia is grabbing 52% of the total dollars wagered.

There’s been noteworthy action on some of the shorter spreads this week too. The Colts opened as 2.5-point road favorites over the Texans, and that line has shifted half a point to Colts -3 (-120). Indianapolis is generating 93% of the total dollars wagered among all spread bets vs. the Texans, the most lopsided Week 13 side so far at William Hill. That is highlighted by one Nevada bettor who placed $22,000 on Colts -3 (-110) for a total potential payout of $42,000, which is the largest NFL Week 13 bet as of now at William Hill.

There are two games at pick’em, including a Monday night affair between the Bills and 49ers in Arizona due to COVID-19 protocols in Santa Clara County. Even though San Francisco won’t be playing a “home game” in its home state, the 49ers have gone from +3 to pick’em, the biggest spread move in Week 13.

“The new stadium for the 49ers has to mean something, just because they’re used to it and the surroundings,” said Bogdanovich. “Going from preparing for a home game to losing a day because of travel, it means something. A point [on the spread] maybe. But in 2020, nothing should be unexpected at this point. The sharps definitely like the Niners in this game despite the weird spot. They’re coming off a great win and they’re getting healthier. The Bills still have to travel across the country too.”

William Hill bettors are divided on this contest as well, as the Bills have the advantage in total number of tickets at 69% while the 49ers have the edge in total dollars wagered at 55%.

Check out William Hill’s latest odds and trends for every available NFL Week 13 game below.