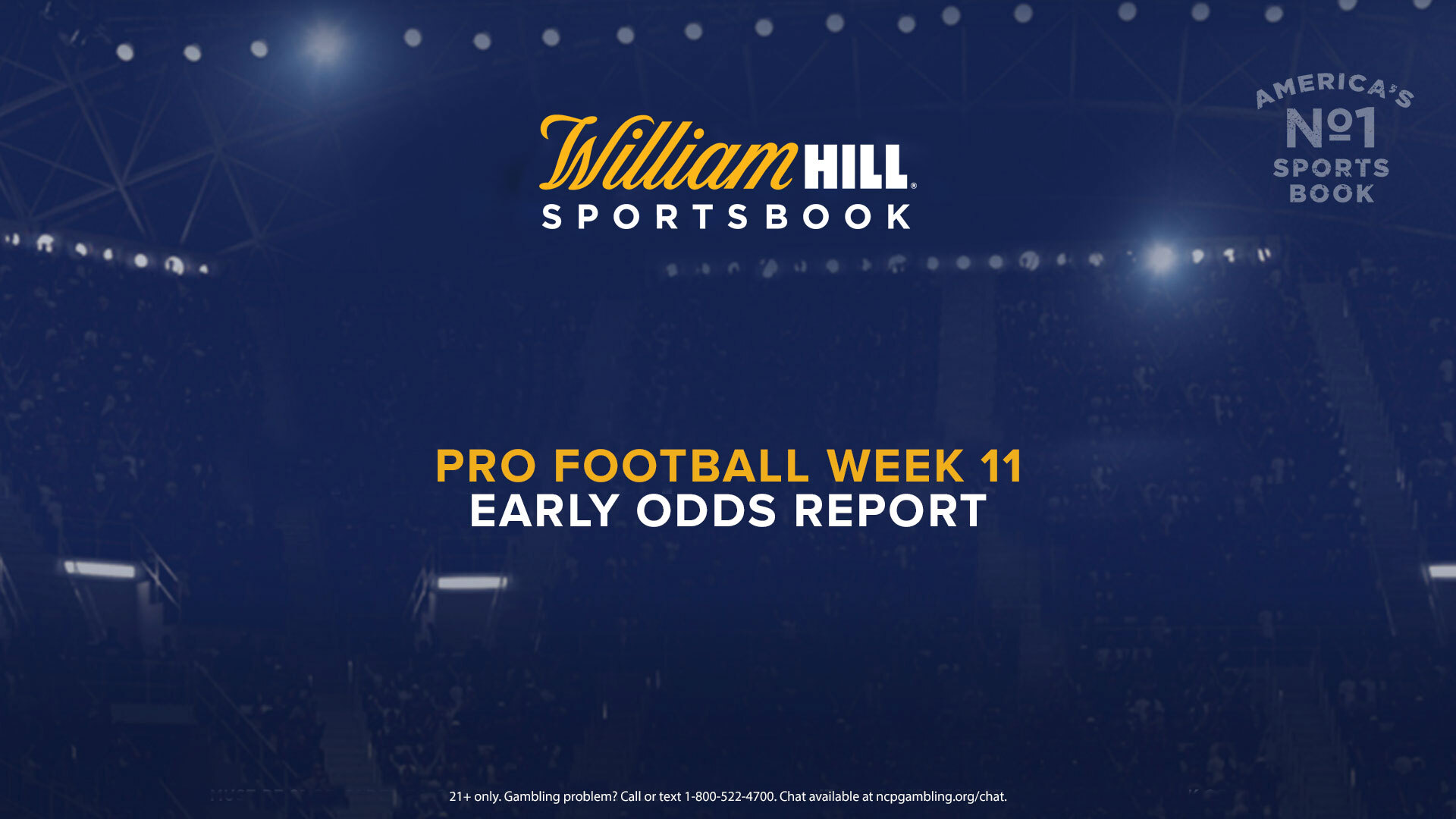 There are five NFL Week 11 contests featuring two teams with three losses or fewer on the season, including all three prime-time games. With the stakes so high on the slate this week, let’s see how the odds are shaping up early on at William Hill.

It’s a three-way tie atop the NFC West, and one team will gain sole possession of first place on Thursday night. The 6-3 Cardinals face the 6-3 Seahawks in Seattle, with the home team favored by three points. Arizona opened as a 4-point road underdog, but the line has dropped by a point since then.

The total for that one sits at 57.5, which if it ends up there, it would be the highest NFL total at William Hill this season. Cowboys vs. Seahawks in Week 3 currently holds that status after closing at 57.

“Good game, meaningful game, two dynamic quarterbacks,” said Nick Bogdanovich, Director of Trading at William Hill US. “It’s going to be bet very heavily, I think it’s going to be very even based off the early returns. And as long as the weather’s good in Seattle, I think this total will close at 58 or higher. Both teams have porous defenses and incredible quarterbacks.”

“Packers-Colts is an interesting one for sure,” Bogdanovich said. “I guess people think that Indy’s got the extra days to prepare and Green Bay doesn’t. Colts have had a losing record at home, on the road they’ve been dynamite. So I don’t really understand this move outside of the extra prep time. Indy did draw a lot of money before the season started and they’ve drawn quite a bit of money week to week.”

The biggest injury news of Week 10 was Saints star quarterback Drew Brees suffering fractured ribs and a collapsed lung in a victory over the 49ers. With Jameis Winston likely to get the starting nod under center, New Orleans is a 5-point home favorite over its NFC South rival, the Falcons.

“Obviously Jameis has been on the big stage many times, so it’s not like he’s a scrub,” said Bogdanovich. “Brees is at the end of his career, and I don’t want to say he’s a game-manager, but he’s certainly not like Brees in his prime. Winston’s so volatile, Winston at his best as nearly as good as Brees at his best, but Winston also threw for 30 interceptions last year. I’d say Brees is worth about three points more than Winston.”

There may not be a hotter team in the NFL than the Dolphins, who have won and covered five consecutive contests. Miami opened as a 2.5-point road favorite in Denver, but is now -3 against the Broncos. Even with a rookie quarterback in Tua Tagovailoa making just his fourth career start, William Hill bettors are heavily backing Miami thus far.

“We’ll need Denver massively this week. Miami just wins,” Bogdanovich said. “They’re 3-0 with Tua, and it’s not like he’s racking up gaudy numbers, but their defense gives him a lead and he just veers them on home. Denver’s a train wreck, they looked terrible last weekend against the Raiders.

“Chiefs-Raiders and Buccaneers-Rams are two huge games to end the week, but I don’t think those will be as big of decisions with how good the underdogs have looked of late. So yeah, I think the biggest decision we’ll have this week could be Miami-Denver.”

Check out William Hill’s current odds for all available NFL Week 11 games below.