Pro Football Week 1: Odds Up for All 16 Games 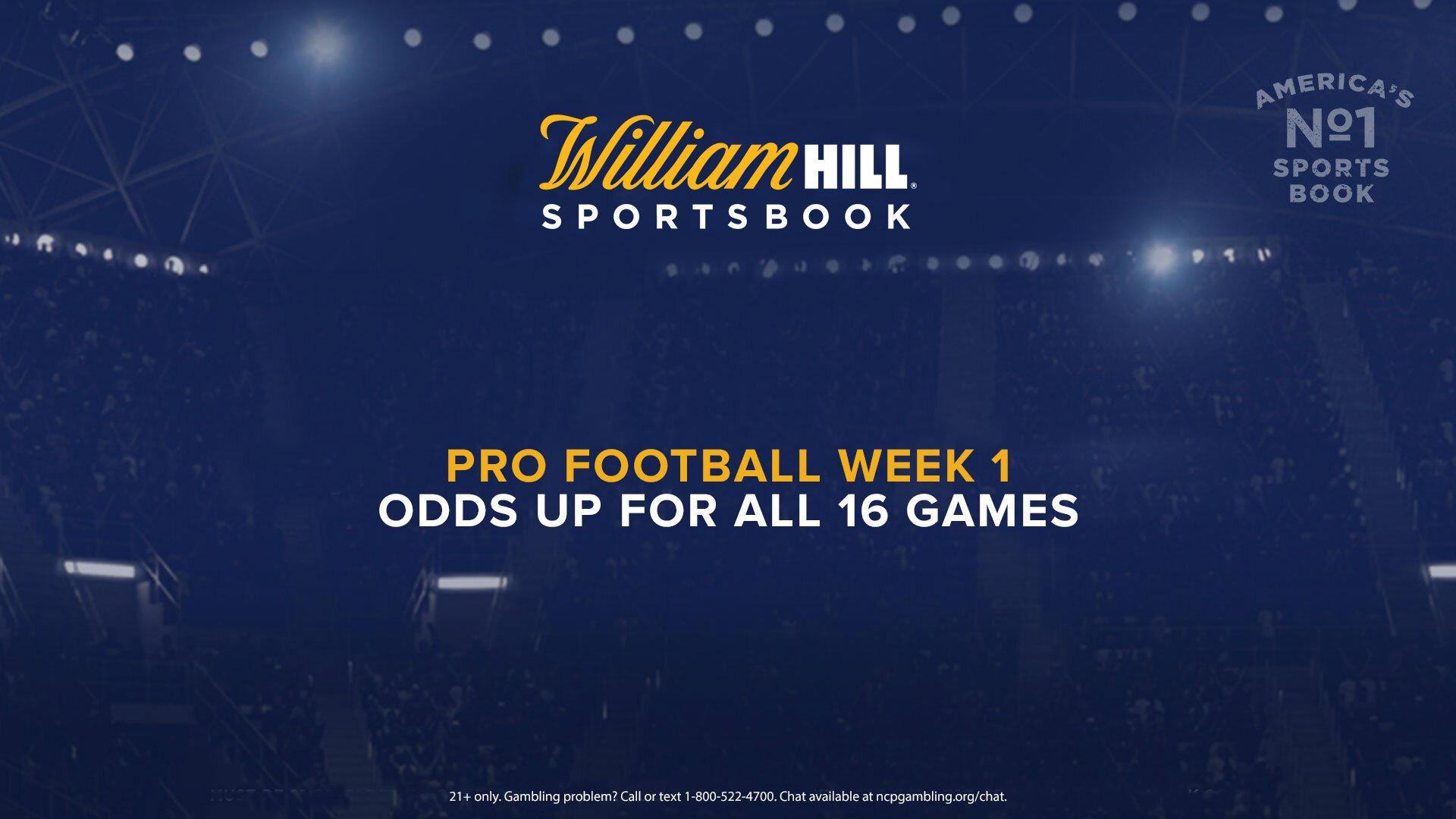 Ah, a Christmas morning-like sensation for bettors is here at William Hill: NFL Week 1 lines for the 2021-22 season have just been posted.

William Hill has all 16 games up, with spreads, totals and moneylines for every single Week 1 matchup. Let’s take a look at the odds for some of the more noteworthy matchups on the slate.

The opening kickoff is the defending Super Bowl champion Buccaneers hosting the Cowboys on Thursday night. Tampa Bay (-270 on the moneyline) is a 6-point home favorite over Dallas (+230 ML), with the total at 53.

“With it being a Thursday night standalone game, we went with a slightly higher number of 6,” said Adam Pullen, Assistant Director of Trading for William Hill US. “Tampa returns everyone after winning the Super Bowl, but with this being the first game of the year, I think you’ll see plenty of Cowboy money as well. They do have Dak [Prescott] back and got some guys on defense in the draft that they’re hoping can solve their issues. But it’s definitely an entertaining matchup.”

The biggest storyline in the NFL right now is the Aaron Rodgers saga with the Packers. The reigning MVP reportedly said this offseason that he doesn’t want to return to Green Bay. Meanwhile, the Packers find themselves in New Orleans to start their season, and they’re 1.5-point underdogs to the Saints.

“We were debating having this line up, but there’s too much hype with the whole [Aaron] Rodgers situation not to do it,” Pullen said. “It’s hard to get a grasp of what’s going to happen, but until something happens, we have to put the line up leaning to him in [Green Bay]. If Jordan Love ends up being the guy, then obviously there will be a huge shift. But we have to go with what we know now, and for now, [Rodgers] is on their roster.”

Yet, a different Week 1 contest featuring another team dealing with quarterback uncertainty was an even trickier spread to set for William Hill US traders. After finishing with the NFL’s worst record, the Jaguars begin the Trevor Lawrence era as 2-point road favorites over the Texans.

“The game we had the most discussion setting the line for was Jaguars-Texans,” Pullen said. “I actually had Houston as a small favorite. Those numbers that are right around pick’em can easily swing one way or the other. We don’t know whether Deshaun Watson is going to be the quarterback. For now, he’s the guy until news breaks that says otherwise. I’d say that one was the most difficult [Week 1 spread]. Starting quarterbacks determine what the lines are, the biggest shifts in lines are for the quarterbacks. But you can’t try and anticipate what’s going to happen, and he’s still on the team.”

Of the entire intriguing Week 1 slate, there’s one playoff rematch from last season. The Chiefs narrowly escaped the Browns in the Divisional Round, and these two foes clash once again at Arrowhead Field to kick off their respective campaigns. Kansas City is 6-point chalk over Cleveland, while the total of 53.5 is the highest on the board.

“I can see the Browns being a public underdog here,” Pullen said. “I think the hype machine will be behind the Browns, and deservedly so. They look like they’re definitely on the upswing, a lot of people are expecting the Browns to take another step forward. So I wouldn’t be surprised if there’s a lot of Browns money, even against the Chiefs.”

The final Week 1 affair takes place in Sin City, as the Raiders welcome the Ravens to Las Vegas. The Ravens are listed at -5.5, as only the 49ers (-7 at the Lions) are bigger road chalk in Week 1. Additionally, the total for this prime-time showdown is at 52.

“It’s another good Monday night matchup, there should be a lot of hype around the game,” Pullen said. “There’s definitely a gulf in class between these two teams, but I think the Raiders as a home dog might entice people. Everyone’s excited, especially in this town, to get fans in the stands. It’s going to be electric to see the atmosphere when that night comes. But the Ravens are deservedly that high of a favorite on the road.”

Check out William Hill’s NFL Week 1 spreads and totals for every game below.