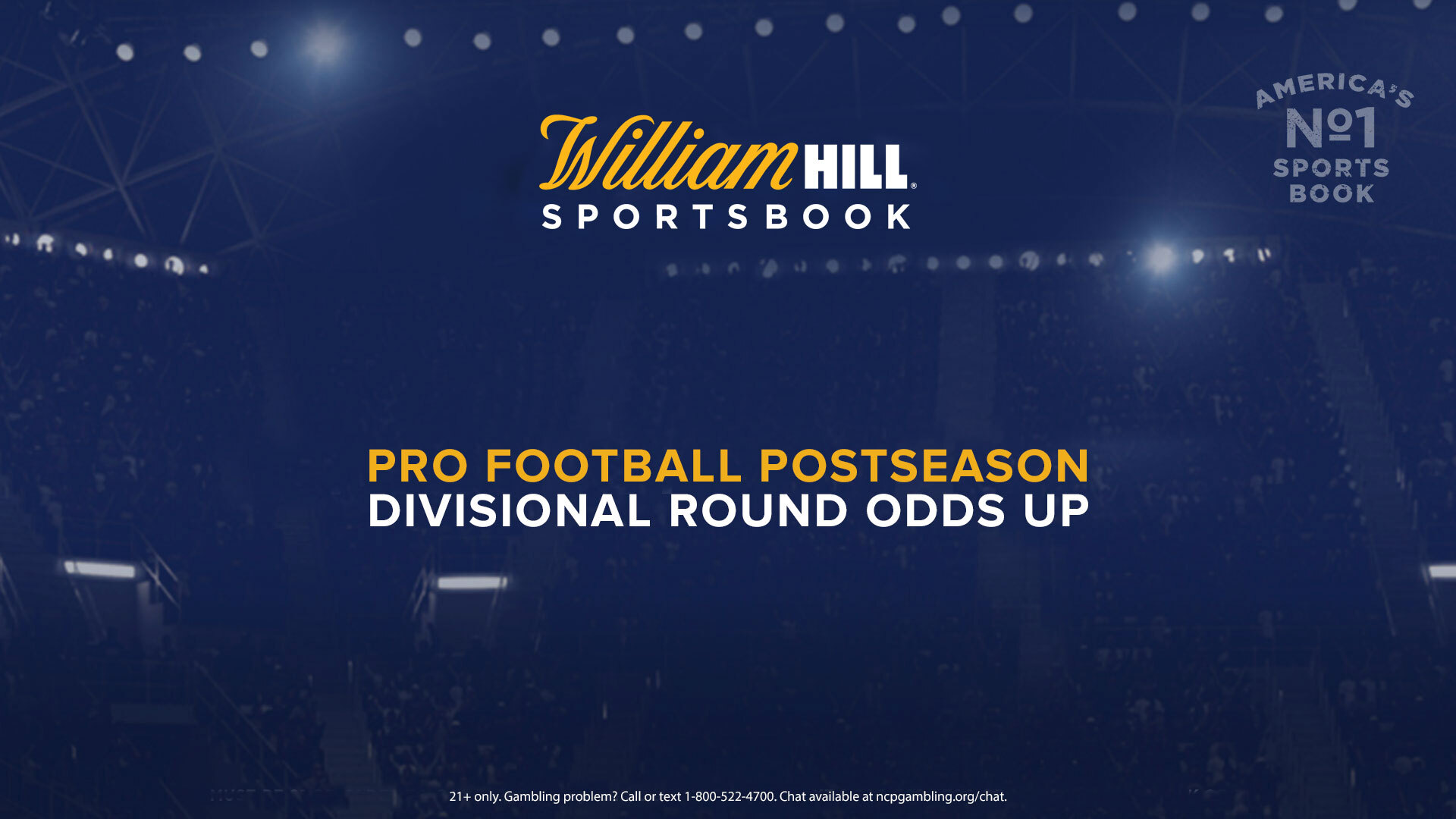 The original 14 playoff teams have been cut to eight following last weekend’s results. As a result, we have four very interesting Divisional Round matchups on tap this week. William Hill has odds up for all of them, including the No. 1 seeds in each conference making their 2021 postseason debut.

The first showdown is between the Rams and Packers at Lambeau Field, with Green Bay coming off a bye. Los Angeles won outright in Seattle in the opening round as a 3-point underdog, but now the Rams have a taller task as current 7-point underdogs in Green Bay at William Hill. This game features the lowest Divisional Round total at 46—in fact it’s the only one not in the 50s.

“Obviously you see the advantage of having the bye in this matchup,” said Nick Bogdanovich, Director of Trading for William Hill US. “Not only do you get a home game, but [Jared] Goff is banged up, [Aaron] Donald is banged up and [Cooper] Kupp is banged up. That’s why that No. 1 seed is huge.”

The Saturday night clash is the shortest spread of any Divisional Round game, as the Bills are 2.5-point home favorites over the Ravens. The Bills beat the Colts 27-24 as 7-point favorites, while the Ravens won and covered (-3.5) on the road after defeating the Titans 20-13. Lamar Jackson and Josh Allen each picked up their first career playoff win in the process, and Ravens head coach John Harbaugh set an NFL record with his eighth road playoff win. Will William Hill bettors continue to be enamored with the Ravens’ postseason success away from home?

“I’m the biggest believer in the Ravens that there is, but I don’t know if this line will drop down to pick,” Bogdanovich said. “I can see it dropping from 2.5, but not all the way down there. The Bills are still a strong team and there was so much money on the Bills this past weekend.”

The biggest line is between the defending Super Bowl champion Chiefs and the surprising Browns. Cleveland pulled off the upset over Pittsburgh last night to notch its first playoff victory since 1994. Even with the Browns dropping 48 points on the Steelers, they still find themselves as 10-point road underdogs to No. 1-seeded Kansas City. This contest also has the highest Divisional Round total on the board at William Hill, as it sits at 56.

“The Chiefs haven’t covered in two months,” Bogdanovich said. “But they’re getting a Browns team coming off an emotional victory and celebrating like crazy. Now they have to go to K.C. and slow down Mahomes. Maybe the fact that the Chiefs haven’t covered in so long may slow some people down on the spread, but I still think there will be plenty of teaser and moneyline parlay money on them.”

The fourth and final battle of this slate is the only regular-season rematch, with the Buccaneers and Saints meeting for a third time this season. New Orleans is a 3-point home favorite right now at William Hill, while the total is at 52. The Saints and Buccaneers were the two biggest favorites for Wild Card Weekend, with New Orleans covering (-11 vs. Chicago) and the Buccaneers not (-10 at Washington).

“I like the Saints in this game,” Bogdanovich said. “I think them and the Packers are the class of the NFC. It wouldn’t surprise me if Tampa went in there and won, but I’m just fully expecting the Saints to take care of business. I think the Saints are a little more well-rounded, I think they’re better coached, better defense. They’ve been the best in the NFC the last 2-3 years, they’ve just had bad playoff luck.”

Check out William Hill’s current Divisional Round odds as well as the latest Super Bowl futures below.