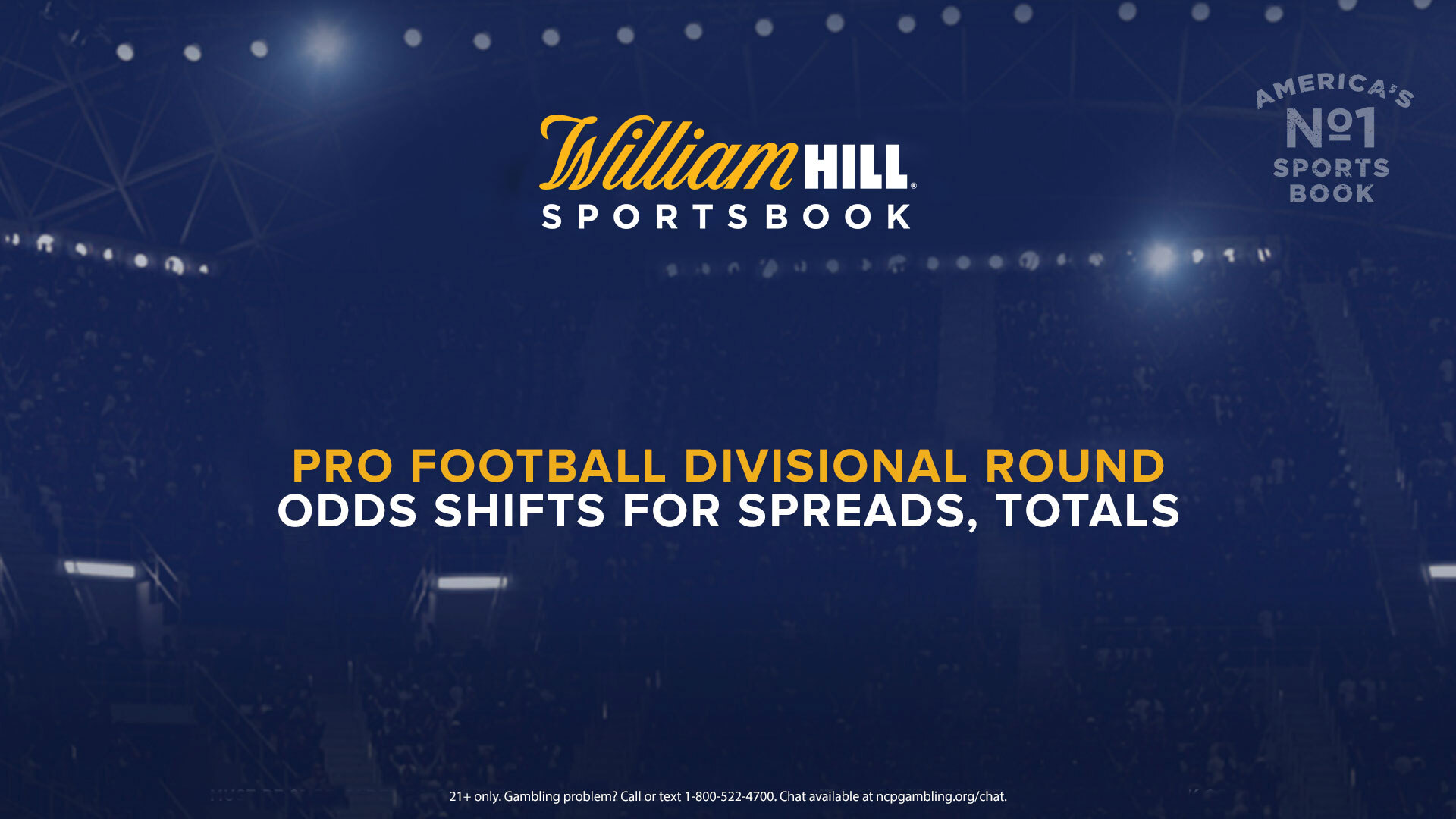 There are just seven NFL games left this season, with four of them taking place in this weekend’s Divisional Round. Since William Hill put up Divisional Round odds this past Sunday, one spread has shifted by a point and three totals have moved by at least 1.5 points.

On Saturday at 4:35 p.m. ET/1:35 p.m. PT on FOX, the NFC’s No. 1 seed faces the league’s stingiest defense. The Packers opened as 7-point home favorites at William Hill over the Rams, though that line has gone down to -6.5. This is also the only Divisional Round total that has decreased, as it went from 47 to its current number of 45.5.

“The sharps definitely took 7 and we went to 6.5,” said Nick Bogdanovich, Director of Trading for William Hill US. “At 6.5, all the money is on the Packers from the masses—teasers, moneyline parlays, straight parlays, straight bets. The masses may shove it back up to 7.”

The Saturday night game at 8:15 p.m. ET/5:15 p.m. PT on NBC is at the same spread as the opener, but that doesn’t tell the whole story. The Bills were originally listed as 2.5-point favorites in Buffalo over the Ravens, which is also the shortest spread in the Divisional Round. Yet, the line has bounced around slightly so far this week.

“The early money was sharps on the Ravens and it went down to 2,” Bogdanovich said. “The move back to 2.5 was pretty universal, could be weather-related. Buffalo is strictly a passing team now, wind would hurt them but I don’t think snow would be an issue.”

Sunday’s action kicks off with the defending Super Bowl champion Chiefs hosting the Browns at 3:05 p.m. ET/12:05 p.m. PT on CBS. The total has seen a noticeable jump, shifting from 55.5 to 57. The highest closing total of any 2021 NFL playoff game so far was Ravens at Titans ending up at 53.5. Kansas City is the only double-digit favorite this round, as the Chiefs are -10 after opening at -9.5. With the Browns coming off a major upset victory over the Steelers, do William Hill bettors feel that 10 is too much?

“It’s possible that the Browns could be a public dog with the spread as high as it is,” Bogdanovich said. “Right now, we’re dead even on the straight bets and the parlays for this one. We’re high on the Browns moneyline. Where we’re high on Kansas City is teasers and moneyline parlays. But I think Cleveland will hold their own with the money.”

The final game of this weekend’s slate at 6:40 p.m. ET/3:40 p.m. PT on FOX has featured the biggest spread and total movement of any Divisional Round game. The Saints swept the regular-season series against the Buccaneers, and were first displayed as 4-point home favorites at William Hill. It’s now down to Saints -3 (-120), with the total also going from 50 to 52.

“I’m surprised that this line is down to 3,” Bogdanovich said. “Those games in the regular season weren’t fluky. It’s just years and years of good performance. I don’t know why they think this matchup will be any different for Tampa Bay. I think New Orleans is going to go in with a lot of confidence thinking that they’re going to do it to them again, whereas Tampa has to do something different. We’ll see, maybe there’ll be a flood of New Orleans money later in the week.”

Check out William Hill’s spread and total movements for every Divisional Round game below.