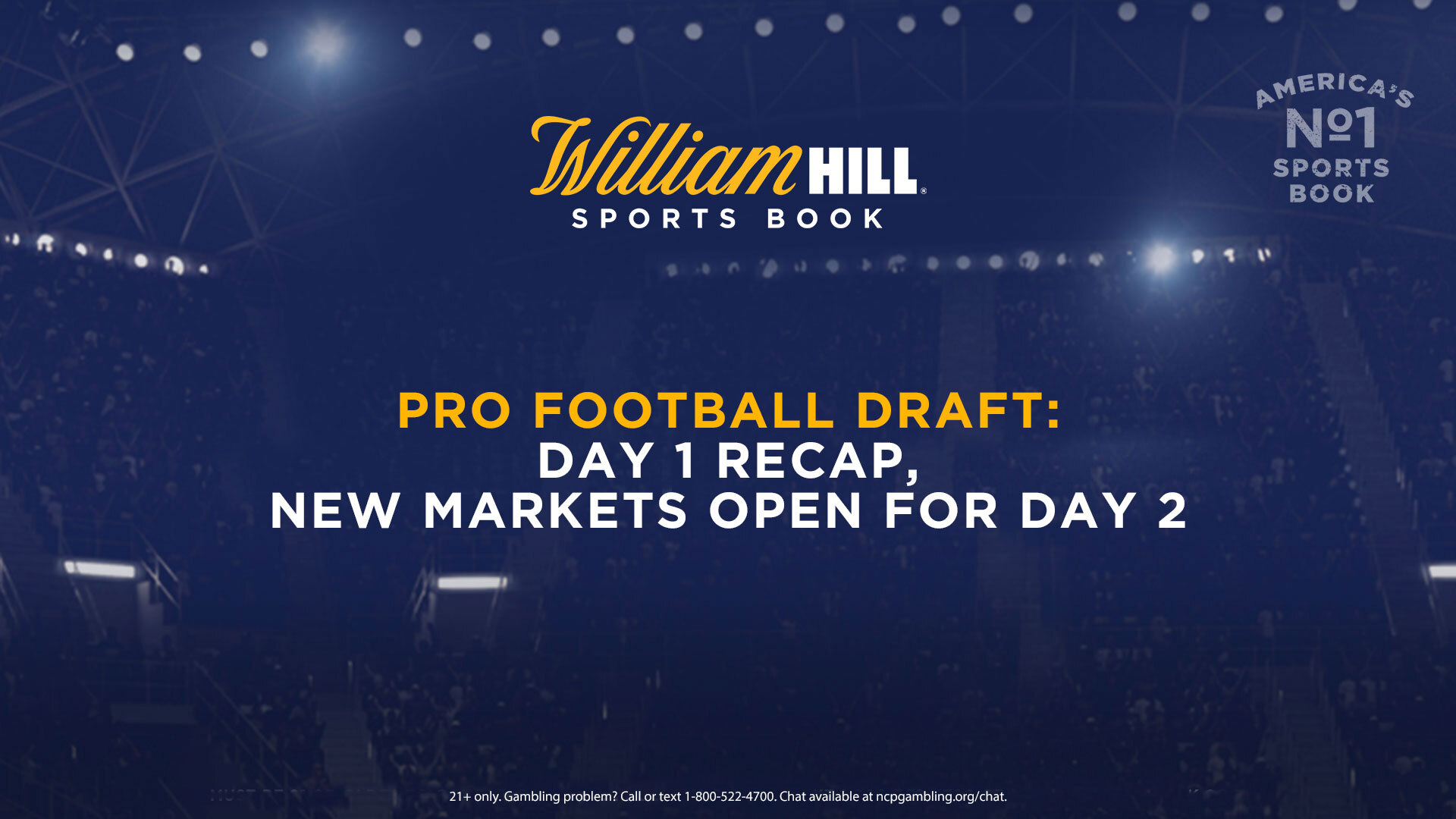 Day 1 of the 2020 NFL draft is in the books, with several interesting twists taking place on Thursday night. And don’t worry, there are still plenty of NFL draft bets still available at William Hill in New Jersey.

After the first four picks didn’t feature much suspense, all eyes were on the Dolphins at No. 5. There was some uncertainty with what Miami would do, evidenced by several draft betting markets having major shifts throughout the past few weeks. In the end, the Dolphins took quarterback Tua Tagovailoa, leaving the Chargers to snap up fellow signal-caller Justin Herbert with the next selection.

Once the draft was outside the top 10, things started getting a little crazy. The Raiders provided the first surprise of the night by taking wideout Henry Ruggs III with the 12th pick.

At 4/1, the Alabama product was behind former teammate Jerry Jeudy (+110) and Oklahoma’s CeeDee Lamb (7/5) for first wideout taken. Yet, Ruggs still cashed for a few William Hill bettors, as he attracted 15% of the total number of tickets and 14% of the total dollars wagered for that prop. Ruggs was also listed at 6/1 to be the Raiders’ first pick of the draft.

Overall, there were six wideouts picked in the first round, with 58% of the total dollars wagered coming in on over 5.5.

There were some unexpected names that were called in Round 1, with Ohio State cornerback Damon Arnette potentially the most shocking of all. Arnette closed at +400 to be drafted on Thursday night in Nevada, as he was tied with Southern Illinois’s Jeremy Chinn for the second-longest odds to go in the first round among all players listed, only behind Notre Dame’s Cole Kmet at +450.

Despite the LSU running back being the final selection of the night, under 15.5 SEC players drafted in the first round survived, as 66% of the total number of tickets and 93% of the total dollars wagered were victorious despite the SEC setting a conference record with 15 players taken. The Big Ten (5.5) also went under by the hook, with the ACC (2.5), Big 12 (3.5) and Pac-12 (2.5) all going over.

In New Jersey, several markets have reopened for Day 2 of the draft, and a couple new markets have been introduced.

Georgia running back D’Andre Swift has the lowest draft position odds on the board at 38.5, followed by Clemson wideout Tee Higgins at 42.5. First tight end and first safety drafted markets are back up as well, with Kmet (-350) and Xavier McKinney (-280) as the favorites in those respective departments.

A few new props have been released, and two of them focus on quarterbacks. Jacob Eason opened as -140 chalk to be the first Day 2 quarterback selected. The Washington gunslinger is ahead of Oklahoma’s Jalen Hurts (6/5) and Georgia’s Jake Fromm (6/1).

Bettors can also wager on where Hurts will land. The field (any other team) is the 3/1 favorite, while the Patriots, Raiders and Steelers are each 9/2 to land the dual-threat quarterback. The Colts are next at 6/1, with the Bears given the biggest longshot odds at 10/1.

Additionally, Georgia’s D’Andre Swift is the -280 favorite to be the first running back taken on Day 2. Other tailbacks with odds listed are Jonathan Taylor at 5/2, JK Dobbins at 5/1 and Cam Akers at 12/1.

In Nevada, William Hill’s Mr. Irrelevant prop is still up. Wide receiver/tight end is the 5/1 favorite for the position of the No. 255 selection, with placekicker/punter have the highest odds at 20/1.