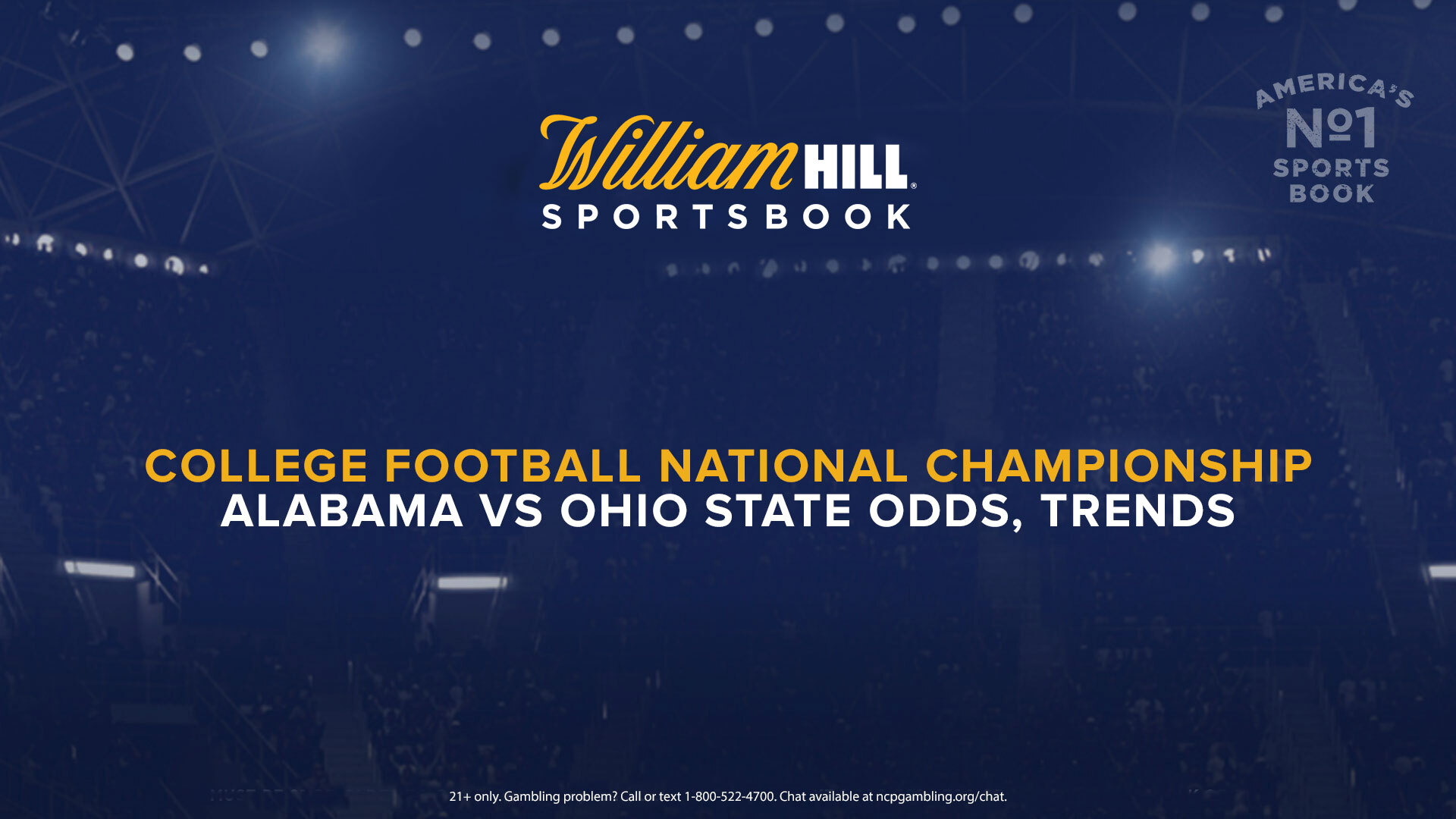 A national champion will be crowned tonight in college football, as two of the country’s most storied programs meet up in an epic showdown.

No. 1 Alabama opened as a 7-point favorite over No. 3 Ohio State at William Hill, however the line has swung to Alabama -8 and reached as high as -8.5. The Crimson Tide are listed at -320 on the moneyline, while the Buckeyes are +260 to pull off the outright upset.

These two teams have met in the College Football Playoff before, as it was actually the very first CFP game ever. Then-No. 4 Ohio State shocked No. 1 Alabama 42-35 in 2015, with the Buckeyes going on to take home the national championship against Oregon.

Alabama won but didn’t cover as an 18.5-point favorite in this year’s CFP semifinals after beating Notre Dame 31-14. On the other side, Ohio State cruised 49-28 as a 7-point underdog over Clemson. Do William Hill bettors think the Buckeyes can pull off a second straight upset tonight?

“We’re actually pretty even on the game. We’re probably going to need Alabama to win but not to cover,” said Nick Bogdanovich, Director of Trading for William Hill US. “These are two great offenses, and Alabama might be getting [star wideout Jaylen] Waddle back tonight. As good as he is, I don’t think he’s worth much to the spread since he hasn’t played in months and every Alabama wideout is already super good. So I just don’t see him being razor-sharp or having a big-enough load to impact the game.”

William Hill bettors are divided on the spread, as Alabama is bringing in 54% of the total number of tickets and Ohio State has generated 54% of the total dollars wagered. The Buckeyes have actually drawn the four biggest spread bets thus far at William Hill for the national championship, highlighted by one Nevada bettor placing $125,000 on Ohio State +8 (-110) for a total potential payout of $238,636.35.

For the moneyline and total, William Hill bettors are more aligned. Underdog Ohio State has collected 61% of the total number of tickets and 54% of the total dollars wagered among all moneyline bets vs. Alabama, including an Iowa bettor putting down $20,000 on Ohio State +250 for a total potential payout of $70,000.

There’s been some movement on the total as well, as it went from an opener of 76 to its current number of 74.5 The majority of William Hill bettors think that’s too many points, as the under has captured 59% of the total number of tickets and 76% of the total dollars wagered.

“I think there will be a late surge of over money leading up to kickoff,” Bogdanovich said. “I actually think we’ll end up needing the under in this one. It’s crazy to see a total this high in the national championship, but it’s warranted with these two teams.”

For player props, one stands out in terms of total dollars wagered. The number of touchdown throws for Ohio State quarterback Justin Fields has been set at 2.5, with the over at -130 and the under at even-money odds. William Hill bettors have been heavily backing the under on that one.

Another popular wager for William Hill bettors has been DeVonta Smith as the first touchdown scorer, where the Heisman Trophy winner is priced at +375. That’s second behind his teammate and Alabama tailback Najee Harris at +300. The Ohio State player with the lowest odds in that market is running back Trey Sermon at +600. Waddle, meanwhile, resides at +850.

Check out William Hill’s latest odds and trends for tonight’s national championship between Alabama and Ohio State below.