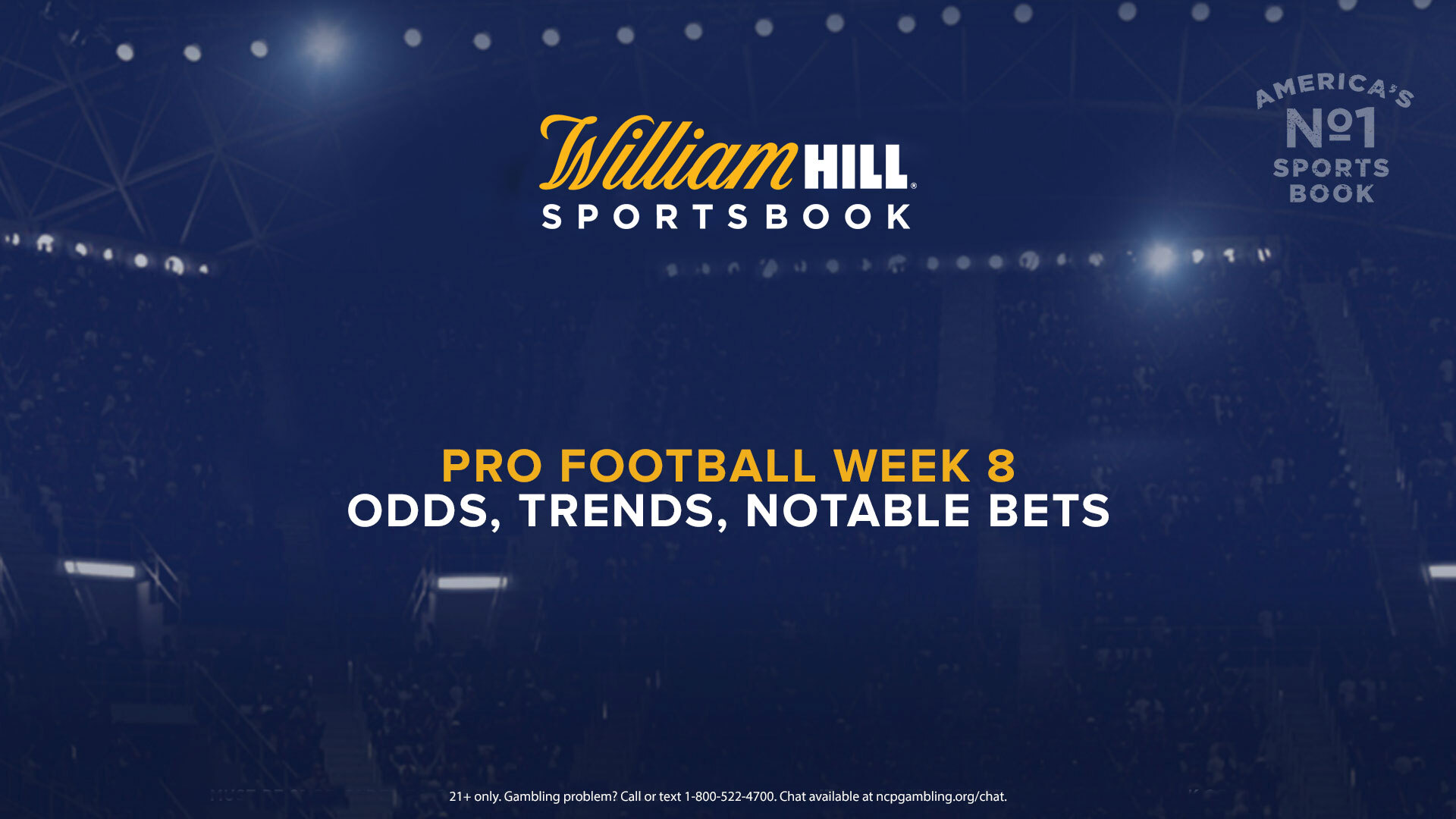 What’s not to like about Week 8 of the NFL season? It has the biggest spread of the season, the last undefeated team taking on its biggest rival, a first-round rookie quarterback making his first career start and a six-figure wager already taken at William Hill.

William Hill currently has 12 Week 8 games up, with Chargers vs. Broncos off the board.

Let’s peek at the latest spread trends for the matchups that are available though.

After opening as 22-point home favorites over the Jets last week at William Hill, the Chiefs were as low as -19.5 before currently settling at -20.

“The Jets for sure are going to be one of our biggest decisions this week,” said Nick Bogdanovich, Director of Trading for William Hill US. “It’s a big number, but we still won’t sell many bets on the Jets. The professionals thought the Chiefs would get in and get out with a win, so they backed the Jets when we opened them at 22. But the public is all over the Chiefs.”

Just one underdog is attracting the majority of the tickets and dollars in their contest. The 6-0 Steelers opened as 6-point underdogs at the 5-1 Ravens, dropped down to +3.5 and are now +4. Pittsburgh has drawn 75% of the total number of tickets as well as 58% of the total dollars wagered.

“There was some buy back at 3.5 from some of the people who took 6 and 5.5 probably,” Bogdanovich said. “I think this will end up being a pretty even game in terms of action. It won’t be one of our bigger decisions. This game should sit around 4 until it kicks off.”

Two of the tighter spreads in Week 8 at William Hill are Colts -3 at Lions and Rams -3.5 at Dolphins. One Nevada bettor is very high on the home underdog in Detroit, as a $100,000 wager was placed on Lions +3 (-120) for a total potential payout of $183,333.35. That is the largest NFL Week 8 bet as of now at William Hill. The Lions are bringing in 86% of the total dollars wagered for all spread bets against the Colts, yet Indianapolis has the edge in total number of tickets at 65%.

Rams vs. Dolphins is especially intriguing since it’s the first start for rookie quarterback Tua Tagovailoa. Additionally, Miami is coming off a bye while Los Angeles has a short week after playing on Monday night and has to travel across the country for an early kickoff.

“We opened 3.5, then it went up to 4 and now it’s back down to 3.5,” Bogdanovich said. “We’ll need Miami definitely. This isn’t the easiest defense to go up against for Tua, but the Dolphins were confident enough to make the switch, so he must have looked pretty good in practice. The spot does call for Miami, I just don’t know if I could back them before seeing anything from Tua in an NFL game.”

William Hill bettors are mostly taking the road favorite here, as the Rams are receiving 76% of the total number of tickets and 67% of the total dollars wagered.

Check out William Hill’s latest trends for the available Week 8 NFL spreads below.